Multi-Asset Investments views – April 2020 – COVID 19 crisis: we have reduced our exposure to risky assets as short-term risk are high

This document is intended exclusively for Professional, Institutional, Qualified or Wholesale Investors / Clients, as defined by applicable local laws and regulation. Circulation must be restricted accordingly

The market correction that began in late February took on proportions not seen since the Great Financial Crisis in 2008 as it became clear that a COVID-19 pandemic was inevitable. We expect volatility to remain very high over the short term. We remain vigilant with regards to the evolution of new infections in Europe and the United States, the possible acceleration or deceleration will be the metronome of our short-term allocation views. The application of new containment measures similar to those implemented in China are becoming widespread in Europe. We are also closely monitoring the evolution of the virus in the United States, where nearly 30 million people have no medical coverage. We are therefore extremely vigilant in the face of this potentially negative newsflow.

While these containment measures will not put an immediate end to the epidemic, they will help to slow down its progress and relieve the burden on health systems. They will have a significant negative economic impact and are expected to result in a deep recession in developed economies, with a sharp contraction in Q1 and/or Q2. However, growth is expected to rebound moderately in Q3 and more sharply in Q4, equivalent to a U-shaped recovery. This scenario is conditional on the absence of a significant dislocation in credit markets, which could trigger higher defaults and translate into a longer and deeper recession.

Indeed, significant liquidity pressures have begun to emerge, linked in particular to fears that the entry into recession in developed economies could significantly deteriorate the quality of corporate credit and result in more defaults. These fears have had a ramification on credit spreads, as well as in the interbank market, tightening financial conditions and worsening the short-term economic outlook.

In this context, we significantly reduced the overall risk within our Total Return portfolios and strengthened our risk mitigation strategies to deal with the market turbulence, with a reduction of our equity exposure through derivatives (options and futures). Similarly, we also reduced the equity exposure in our benchmarked funds to underweight versus their benchmark.

However, over the medium/long term, we remain constructive and maintain our scenario of a modest recovery in the manufacturing sector by the end of the year. Indeed, faced with the looming risk of recession and liquidity pressures, central banks have started to implement a monetary arsenal to help mitigate the pressure. Thus, the Fed surprised positively by reducing its rates to zero and reinstating its asset purchase programme through unlimited bond purchases and the reinstatement of its Commercial Paper Funding Facility to allow companies to access short-term financing. Similarly, the ECB has relaunched a massive quantitative easing programme through the planned purchase of EUR 750 billion of government and corporate bonds by the end of the year. Simultaneously, the fiscal portion of the response to the crisis is gradually being prepared, with the various governments announcing major support measures, notably Germany, which will put in place a €156 billion tax package (4.5% of GDP) and has pledged to provide EUR 500 billion in loan facilities to support companies in difficulty. Similarly, the United States is preparing a gigantic USD 2,000 billion plan (compared with USD 700 billion for the TARP in 2008) to support household income and prevent business failures and thus cushion the economic shock.

In conclusion, we recognize that short-term risk has increased significantly and have reduced our exposure to risky assets to preserve capital accordingly.

To exit this crisis, we believe three conditions need to be fulfilled:

Volatility at levels not seen since the Great Financial Crisis 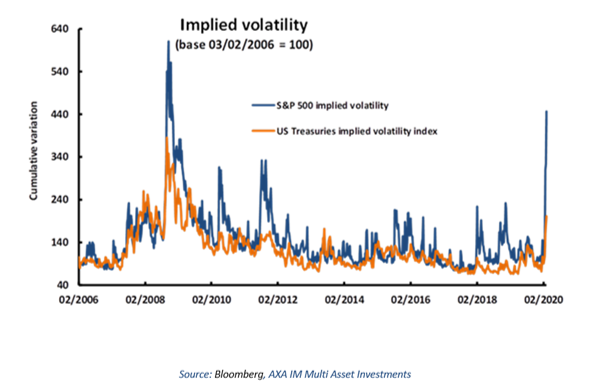 Not for Retail distribution: This document is intended exclusively for Professional, Institutional, Qualified or Wholesale Clients / Investors only, as defined by applicable local laws and regulation. Circulation must be restricted accordingly.

Due to its simplification, this document is partial and opinions, estimates and forecasts herein are subjective and subject to change without notice. There is no guarantee forecasts made will come to pass. Data, figures, declarations, analysis, predictions and other information in this document is provided based on our state of knowledge at the time of creation of this document. Whilst every care is taken, no representation or warranty (including liability towards third parties), express or implied, is made as to the accuracy, reliability or completeness of the information contained herein. Reliance upon information in this material is at the sole discretion of the recipient. This material does not contain sufficient information to support an investment decision.

Issued by AXA INVESTMENT MANAGERS PARIS, a company incorporated under the laws of France, having its registered office located at Tour Majunga, 6 place de la Pyramide, 92800 Puteaux, registered with the Nanterre Trade and Companies Register under number 353 534 506, and a Portfolio Management Company, holder of AMF approval no. GP 92-08, issued on 7 April 1992